Today I wanted to spend some time explaining something that has been happening in the background. As you know I love my drums and love drumming and while I am new, I am picking things up fairly quickly and decided that I was going to add to my set. I decided I would like to add the 16″ and 18″ floor toms and to match my current set if at all possible as I am really happy with my drums (Taye Studio Maple in Green Black Burst) As there are no longer any Taye dealers in my area I contacted Taye directly and got set up with dealers both in Canada and the US which I then contacted to try and special order. What blew my mind was that I was getting a variety of pricing from all the Canadian dealers ranging from $449 Canadian ($356 USD) up to $735 Canadian ($599 USD) for one of the Toms and even more for the other. In the end I found a place relatively close (will remain unnamed for now) that said they could order them at a reasonable price – They asked me for my credit card to put a hold on the card and would charge once confirmed that drums were on route. I then saw that my card had been charged and when I talked to them they not only told me that they were not ordered but that in order to get them I would have to get them from Taye directly in Japan and that it would be $600 in shipping. Obviously bothered by the fact that I had already been charged and had nothing for it I asked for a refund and that I would make other arrangements. It is now five days later and the refund has yet to show up in my account. If I do not get the refund soon than this will turn into a rant post rather than just being a post about my experience.

Now the good side of the story – I then contacted Taye again and once again Katy at Taye was amazing in taking care of me. They set me up with Stuart of Paradiddles Drum Shop who contacted me right away and within a day was able to do what other stores couldn’t get organized in nearly a month. He was open and direct about the upcoming holidays and how that will affect my order and said he would contact me as soon as he had tracking information.  All together, I will now have the drums delivered directly to my house instead of the shop an hour away and the total cost is only $50 more than the original quote before I was told of the $600 in shipping.  I know you all have your stores that you are happy with but if there is anything they cannot help you with I encourage you to give Stuart a try at Parradiddles Drum Shop. I am not sure if he is international but he is for sure in the US and Canada.

Once I get the Toms I will most likely add a China, a Splash and another Crash to my kit at some point and hopefully leave it at that for a while.  I am already having a bit of a laugh that I will be at a seven piece kit when I thought a five piece would be more than enough for me and when most of my friends that are drummers are using four piece kits.

To end this post, which again I really didn’t want to be a rant, 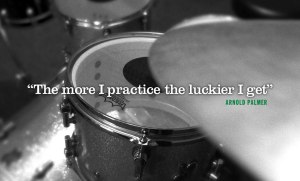 I will say that yesterday I had one of my best lessons and oddly enough it was not from my regular teacher.  A regular teacher was away at a show he was performing in and had his original instructor come in to cover the classes.  I was a little apprehensive as I am enjoying working with my teacher and thought I would spend more time explaining were I am at than actually playing and learning. That was not at all the case – he was well prepared and new approximately were I was at and new that I really enjoy the reading music and understanding side of things so he had music written out that was increasingly challenging as well as written in different ways for the same beats so that I expanded by reading and understanding of music.  I honestly walked out of the room smiling from ear to ear.  It was also awesome to work with the guy who was my teachers teacher twenty or so years ago.